Edwards on the Christian Life: Alive to the Beauty of God
Dane C. Ortlund
Crossway, 2014 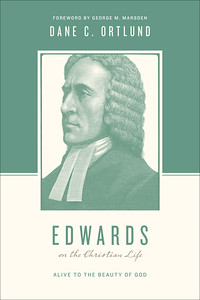 ‘If all we know of Van Gogh’, writes Dane Ortlund, ‘is what we read in art history books without ever actually viewing a Van Gogh painting, we will have an impoverished appreciation of this great artist. We must go to the artistry itself’.
I tend to subscribe to the idea that it’s better to read the great theologians of the past themselves, rather than read books about them. And so, although Ortlund seeks to avoid that problem by quoting plenty of Edwards himself, he, along with the other authors of Crossway’s Theologians on the Christian Life series have to give us reasons to read their books rather than the giants they write about. While I hoped Ortlund’s book would succeed in this area, especially after it made third place on Desiring God’s 14 Best Books of 2014, I was in the end left disappointed by a book which tells the reader at least as much about Ortlund and New Calvinism as it does about Edwards.

The book starts rather jarringly, giving the reader no introduction or historical context to who Jonathan Edwards actually was, apart from a few scattered details – he was ejected from his church, died in 1758 and never watched the Super Bowl or Skyped. It feels like someone has just walked into your house without any greeting and begun talking theology. In fact that Ortlund feels he has to persuade Christians that they can still learn from someone who has never spent their Lord’s Day watching sport is an early indication of the angle that the author is coming from.

Those expecting an academic treatment like Sinclair Ferguson’s John Owen on the Christian Life are going to be disappointed. Ortlund tries to apply Edward’s theology to the lives of his readers, which is an admirable aim, but ends up turning the book into ‘Jonathan Edwards – and the random thoughts of Dane Ortlund – on the Christian life’. Ortlund’s sources include Doug Wilson’s blog, a Mark Driscoll interview and the film version of the Hobbit. He asks the reader to imagine people saying ‘Why so somber, Jonathan?’. Somehow a corny joke (‘The soul is not the bottom of your foot. That’s your sole’) which would be cringeworthy even at a youth group makes it into a published book. And Ortlund (a PhD and professional book editor) manages to mix up the verb ‘envelop’ with the noun ‘envelope’ as he points us towards the day that joy will do something to us that involves a flat rectangular piece of paper. Another evidence of poor editing is an Edwards quote which is cited twice in full (pp 132 and 174) with apparently no awareness that it’s already been used. It’s also filled with American illustrations and phrases (NASCAR, ‘ ‘picking up meds in Walgreens’, ‘where’s Waldo and castle Legos’) showing no awareness of a wider audience and meaning that this book will date a lot faster than Edwards. Ortlund also feels that a fairly straightforward quote from a recent academic book needs to be followed by his own ‘Translation’ (p. 168, n. 1). Sinclair Ferguson this is not. Perhaps it’s an unfair comparison (despite the similarities of the titles) and it may just be the approach this series is taking, but it’s difficult to imagine that this week’s release of Luther on the Christian Life (the latest in the series, authored by Carl Trueman) will be anything like Ortlund’s effort.

Apart from Edwards, Ortlund probably quotes or references C. S. Lewis the most (19 times on a rough count – quite a lot for a 195 page book). Now I’m a big Lewis fan, but a couple of times I was left wondering whether Ortlund was using Lewis as a further example of something Edwards taught, or whether he was forcing Edwards through a Lewis filter. This comes across particularly with his treatment of joy and desire, where he fails to provide much evidence that he’s starting with JE rather than CSL. I haven’t read enough Edwards to say for sure, but it doesn’t fill the reader with much confidence when Ortlund builds his entire case mainly on one quote, which could easily be taken another way. The same is true in the chapter on obedience, where Ortlund quotes starts off by quoting Lewis about true obedience as doing what we want to do, but doesn’t wrestle with texts like Romans 7 or Heb 12:4 (resisting to the point of shedding blood), or prove that Edwards and Lewis were in agreement.

Old Calvinists and anyone who treasures the Shorter Catechism will also be alarmed that for Ortlund it is just the soul that is united to Christ (contra WSC #37). There also seems to be a bit of a fascination with sex – reading it into Edwards the way Driscoll reads it into the Song of Solomon. And do we really need the o-word?

All of this isn’t to say there weren’t parts of the book I liked, and not just from Edwards. Some of Ortlund’s illustrations were very helpful. Some of the strongest parts of the book are where Ortlund disagrees with Edwards, and in some of them I would agree with Ortlund (at least on the basis of the evidence he cites). However the annoyances were just too frequent to properly enjoy the book. There’s too much Ortlund and not enough Edwards to recommend someone spending their time reading this. Normally I would feel bad about such a negative review, but seeing as Ortlund writes off Steve Lawson’s recent work on Edwards as ‘hagiography’, let’s hope he can take it as well as give it out.