For the Glory: the life of Eric Liddell, from Olympic hero to modern martyr
Duncan Hamilton
Doubleday, 2016 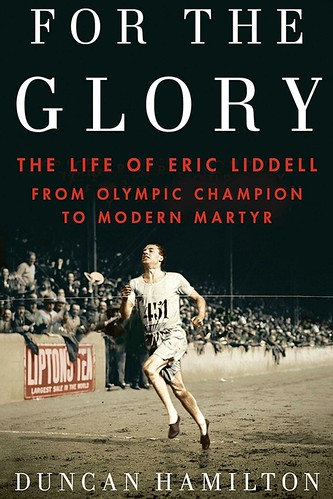 Eric Liddell is one of my Christian heroes. Yet after reading Duncan Hamilton’s excellent biography, I was left asking: ‘Was he a Christian at all?’.

Liddell’s life was impeccable. Hamilton realises that some will be sceptical that someone could live such a good life, but he simply couldn’t find any record of Liddell being anything other than almost super-humanly virtuous.

But amidst all the self-denial, virtue and heroism, there’s almost nothing of the gospel. Undoubtedly part of that stems from the fact that (as far as I know) Hamilton doesn’t write from the standpoint of an evangelical Christian. Approaching Liddell purely from a secular perspective simply can’t do justice to someone who clearly had sincere and deeply-held religious beliefs.

In all the writings, speeches and sermons of Liddell quoted, there’s no sense that his amazing life flowed out of wonder at what Jesus had done for him – however one amazon review from a previous biographer (John Keddie) suggests that there are records of Liddell’s joy at the salvation of souls, they’re just not quoted.

Based on what’s presented here, the question I was left with was whether Liddell’s belief system was one of moralism, or whether the author just sees the fruit and not the root. Certainly, in what’s quoted from Liddell’s wife, there’s no sense that she understood the gospel or what a missionary’s calling was about.

In terms of the other facts of Liddell’s life, the book leaves no stone unturned. If you want to know the facts of his athletic career, missionary endeavours or internment in China, it’s all here. Parts that will remain long in the memory are the huge pressure he came from the British Olympic Association to compromise his beliefs and compete on the Sabbath – and also the folly of the missionary society he was with, separating Liddell’s family, and not trying to pull him out of a warzone until it was too late.
This is a great biography of Liddell from a secular perspective – and will probably move you to tears in places – but it will leave believers with more questions than answers.

Thanks to Doubleday for a complimentary copy of this book.