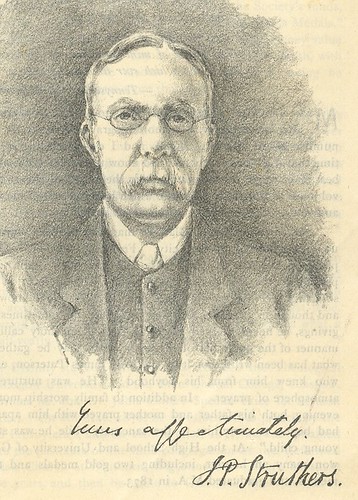 Part 1 (of 2) in a series on what some of Scotland’s better known (if not the most robustly orthodox) theologians of the last 150 years or so made of J. P. Struthers (1851-1915) of Greenock. Struthers, through no fault of his own, is probably the only RP ever to have a Pentecostal denomination named after him!

“There have been many who have sacrificed their careers to what they took to be the will of God. J. P. Struthers was the minister of the Reformed Presbyterian Church in Greenock, a little congregation which, it is neither false nor unkind to say, had a great past but no future. Had he been willing to forsake this church, any pulpit in the land was open to him and the most dazzling ecclesiastical rewards were his; but he sacrificed them all for the sake of what he considered to be loyalty to God’s will.”
The New Daily Study Bible: The Letter to the Hebrews, (3rd edn, Louisville, KY; London: Westminster John Knox Press, 2002), p. 179

“Prestige is the last thing that the great teachers desire. J. P. Struthers was a saint of God. He spent all his life in the service of the little Reformed Presbyterian Church when he could have occupied any pulpit in Britain. People loved him, and the better they knew him the more they loved him. Two men were talking of him. One man knew all that Struthers had done, but did not know Struthers personally. Remembering Struthers’ saintly ministry, he said: ‘Struthers will have a front seat in the kingdom of heaven.’ The other had known Struthers personally, and his answer was: ‘Struthers would be miserable in a front seat anywhere.’ There are some teachers and preachers who use their message as a setting for themselves. False prophets are interested in self-display; true prophets desire self-obliteration.”
The New Daily Study Bible: The Gospel of Matthew (3rd edn, Edinburgh: Saint Andrew Press, 2001), pp 328-9.

“Real Christianity is a lovely thing. There are so many people who are good but who with their goodness possess a streak of unlovely hardness. J. P. Struthers, minister of the Reformed Presbyterian church in Greenock, used to say that it would help the Church more than anything else if Christians would from time to time do a bonnie thing. In the early Church, there was a charm about God’s people.”
The New Daily Study Bible: The Acts of the Apostles, (3rd edn, Louisville, KY; London: Westminster John Knox Press, 2003), p. 34