How to Stay Christian in Seminary
David Mathis and Jonathan Parnell
Crossway, 2014 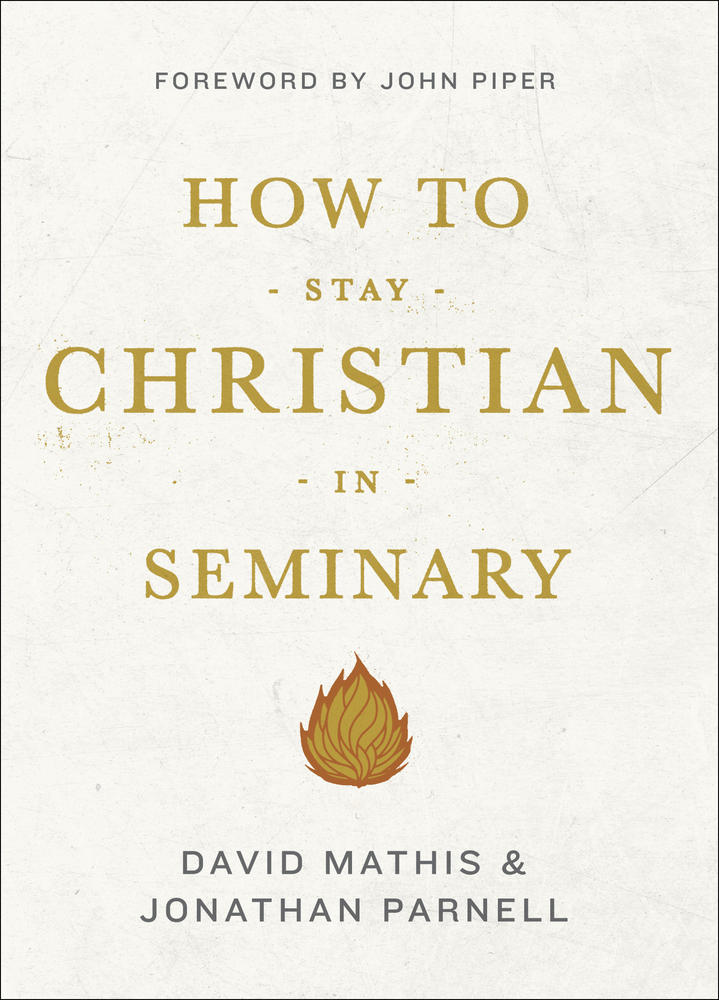 If the title of this book might have sounded over-dramatic to me 3 years ago, it just seems grimly realistic now. Theological education (especially full time) is a great privilege, but it also comes with unique challenges. And that’s the case even in a conservative, orthodox theological college. Being immersed day in, day out in the things of God is an amazing opportunity – but it can easily stay in the realm of the theoretical. Translation, essays and exams can become just another thing you have to get done. As Mathis and Parnell note in the introduction, “students’ heads often pick up on theology faster than their hearts and lives”. If we don’t live out what we’re learning (whether we’re in the pew or the seminary classroom) it can lead to, as one commentator puts it, ‘a toxic build-up of religious knowledge’.
This 80 page book aims to help seminary students fight that danger. In the forward, John Piper identifies this toxic danger and exhorts theological students to give out what they learn. It’s an age-old danger of the 3 year academic approach – taking men out of contexts where they’re already ministering to teach them how to minister better. Perhaps we should be asking not just ‘Are our students learning the right things?’, but ‘In what contexts are they putting it into practice?’
In chapter 2 Mathis takes on another key danger: ‘At the heart of the danger of seminary is coming to treat the grace of God lightly’. The answer, for seminarians and everyone else, is to ‘Be fascinated with grace’. Like all the chapters, it’s brief and can only flag up the problem and point to some correctives. But the chapters can be taken as jumping-off points. Perhaps a student could take one a week and pray over it. As there are only 7 chapters an oversight committee could work through one with their students each time they meet both during the college years and prior to licensing. The next chapters address the very practical issue of daily Bible intake and the central issue of prayer. Our chief goal, Parnell reminds us, isn’t to complete assignments and get through books, but to encounter God.
Chapter 5 is a call, based on Piper’s exhortation to his students to ‘be more like John Newton than John Knox’, to remember that Jesus calls the weak. We fall into thinking that somehow theological education makes us stronger and better – but in fact we should always be amazed that God could use someone weak like us. Piper’s comparison may grate slightly with those who hold the Scottish Reformation in the regard that we do – but the overall point holds. Don’t make the mistake of regarding seminary graduates as anything other than deeply flawed individuals God may have chosen to use.
The exhortation of the penultimate chapter to ‘Be a real husband and dad’ is vital. One area which is conspicuous by its absence however is the role of the church. I didn’t expect anything on the role of the Presbytery/denomination given where the authors are coming from, but I would have expected a chapter on the importance of remaining rooted in the local church.
This is still an excellent, and probably unique, book. It should be absolutely essential reading for theological students – and of course the dangers associated with handling God’s word full-time don’t magically end at ordination. And if you’re just a normal Christian who wants to know how better to pray for your theological students – this short book would be a great place to go.

Paul Wells recently gave a 2 part lecture at the Reformed Theological College on the subject ‘The Messianic consciousness in Christ’s 7 words on the cross’. The audio is available below:

If you’ve been thinking of getting into Logos, now might just be the best time ever to do so. One of the criticisms I’ve had of them in the past is that they’ve claimed to be giving you lots of resources when you buy a base package, but in reality you wouldn’t want most of them. That’s all changed however with their introduction of Reformed base packages. Reformed Platinum gives you all Logos features, some great commentaries (PTW, Calvin, Exegetical Summaries, UBS translators’ handbooks, Poole) loads of Puritan stuff eg works of Owen, Warfield, Charles Hodge, Samuel Rutherford etc etc) (mostly public domain but having it properly formatted, searchable and synced to your tablet/phone is worth it) plus some stuff that’s not public domain: Muller’s Post-Reformation Reformed Dogmatics, lots of Geerhardus Vos, Bavinck’s Reformed Dogmatics, Battles’ translation of the Institutes and more. The only essential things missing from regular Platinum are BDAG and Metzger’s textual commentary. They’ve also taken out the NAC, but most of its commentaries aren’t must-haves – and they can be bought individually.
And all the base packages are 15% off till 12th May. If you already have a base package, dynamic pricing will make it cheaper and you’ll get a lot more stuff (some of which hasn’t been released yet).

The other reason to jump in now is March Madness – the biggest Logos discounts of the year! It’s not finished yet, but already includes Gordon Fee’s NICNT commentaries for 50% as well as books by Beale, Moo, Mounce, Wiersbe etc. Don Carson looks set to win (again).

While I’m at it here are some:
Seminary tips: Book buying and Computer software – based on mistakes I’ve made or narrowly avoided!

Unless you’re absolutely convinced you’re not going to go down the road of electronic resources (and are sure you’re going to end up somewhere you can easily bring all your paper books):

– Don’t buy paper commentaries.
– Don’t buy kindle commentaries (unless they’re a few pounds) – even then you may not use them / remember you have them.
– Don’t buy paper (or kindle) Bible dictionaries, lexicons etc (basically any reference works) unless you just want them to look nice on your shelf.
– Don’t spread yourself across multiple platforms (eg don’t buy stuff on Olive Tree or Accordance just because it’s cheaper/on offer (if most of your books are in Logos – or vice versa) – it’s a massive hassle not to have it all in the one ecosystem.

Specific Logos tips:
– Sign up for academic pricing.
– Sign up to Logos sooner rather than later. You don’t have to buy a base package but you can get things really cheap on Community Pricing and you can get keep an eye on the big annual sales (March Madness, Black Friday, Christmas) and one-off deals to get things that aren’t on academic pricing (BDAG/HALOT etc).
– Keep an eye on Community Pricing. Eg if you act now you will get Symington’s Messiah the Prince (along with another 27 books you may or may not want) for $30 or less, but if you wait you’ll have to either pay $300 for the whole set or wait a year or so till it’s broken up, and then pay about $30 for each individual book!).
If you had been in a couple of years ago you could have got commentaries from the likes of John Brown, Andrew Bonar, Charles Bridges, James Durham etc for peanuts!
– Keep an eye on Ebay where you can get some resources a lot cheaper – especially if they’ve been available for a long time on Libronix CDs: eg Word Biblical Commentary, Preachers’ Commentary (Jackman on Judges/Ruth & Ferguson on Daniel). A $20 admin fee applies per transaction – but then if Logos ever updates the resouces you’ll get the latest versions.

If you do sign up, make sure and help get these Reformed / Covenanter works into production!

Early October saw the public opening meetings of Reformed Theological College and, for the first time in 150 years, that of the Scottish Reformed Presbyterian Seminary.

The opening lecture was given by the Principal, Prof. Edward Donnelly, on John Calvin: The Life of the Christian Man. It can be downloaded from rpc.org or in higher quality, from here.

A full report on the evening, which included video greetings from North America and Canada, and personal greetings from Ireland, is available on the RPCS website. The address was given by Rev. Andrew Quigley. I will post the audio here as soon as I can get hold of it. You can view the SRPTS prospectus here (pdf).