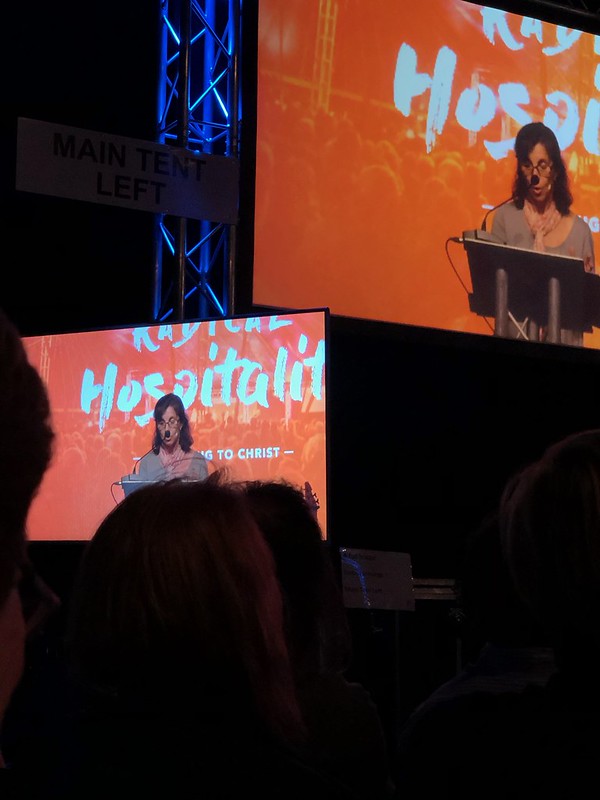 Firstly, it would have been impossible to mix this up with preaching/bible teaching. It was simply her telling her story, along with some challenges and encouragements.

“You cannot have a commuting relationship if you genuinely care for people.”

“There is no gospel for righteous people”

“But what about the children? Yes my children have grown up in this environment and they are doing just fine. They love the Lord Jesus Christ. They know how to witness to their friends. They have seen some of the most unlikely people come to Christ because Christ specialising in unlikely converts. We could all use a good dose of courage in loving the stranger!” 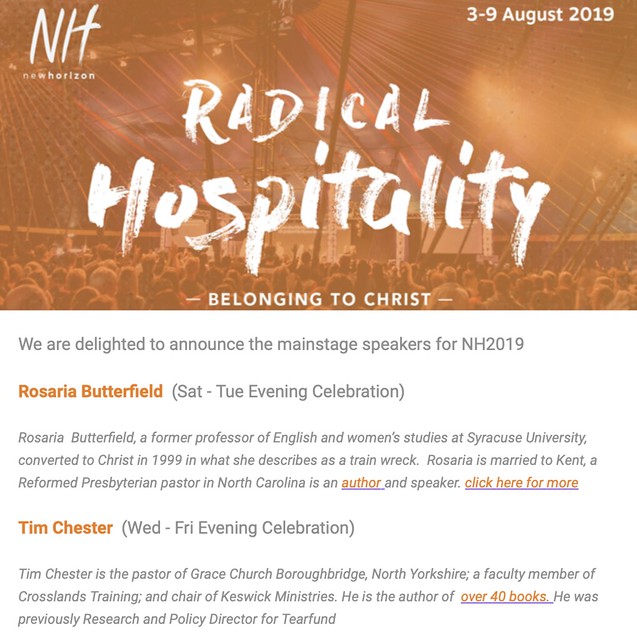 Below is my handbook from New Horizon 22 years ago. 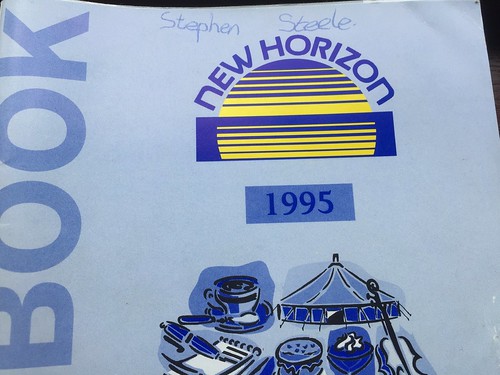 If I didn’t have a soft spot for it, I probably would have entitled this post ‘Parachurch embraces Liberalism shocker’.

This year New Horizon have a woman doing the morning Bible teaching, and both the main speakers (English and Scottish Episcopalians) have women as assistant ministers in their home congregations. The worship is being led by a husband and wife couple, and the wife is the worship pastor in their church.

Why does it matter if they have a woman teaching? And if the others speaking are in favour of it? Well if resisting a clear Biblical command (1 Tim 2:12) isn’t enough (!), Richard Phillips wrote a very timely article last week with yet another example of women’s ordination being the slippery slope that ends up with the gospel itself being lost.

For a reminder of better days, here’s Alistair Begg speaking in 2005 on what now seems a very radical topic: ‘The Bible: Convincing the Mind, Captivating the Heart’

Many RPs will just have attended their last New Horizon for two years after the discovery that next year it will clash with the International Holiday Conference in Gartmore! Bad times!! Hopefully the speaker next year isn’t too exciting!

RP interest this year included an ‘I came, I saw, I painted’ seminar by Vincent McDonnell and a few seminars on relationships by Rachel Gardiner! Only made it on Wed night – big Don Arthur Carson in powerful form – good summary of the talk here.

I now point you to two talks on the Christian and blogging!

The first one comes from this summer’s New Horizon. Kevin Hargaden, who works with Maynooth Community Church, was given the task of talking about ‘Blogging for Jesus’. It didn’t sound too promising, especially if you had read the wee description thing that New Horizon gave it, and obviously I wasn’t going to go to a seminar on blogging anyway! However, after he did the seminar, Kevin put the powerpoint he used on his website, which made the talk sound a lot more promising, with slides like this where he quoted his remit from New Horizon and gave his response: “I’m totally unconvinced that we can blog for Jesus”

So I listened to it and it’s good. Your man’s church sounds pretty cool as well, so if you’re interested in a Presbyterian church contextualising down south, it’s also worth a listen.

Then last Sunday, David Silversides did an after-church meeting on ‘Internet Blogging and the Christian’, which would probably be useful for anyone involved in discussing stuff on the internet. Both talks came down hard on internet anonymity.

‘This address sets out some principles to guide us in the manner in which we are to engage with others in discussion forums and via weblogs (or blogs).

3. The danger of internet pseudo-martyrdom
Contending for the truth ought not to be confined to this mode of activity, as though our duty were discharged wholly by this means. Faithful contending often involves face to face engagement – the example of Knox and Calvin.

4. Stewardship of time
– The need of restraint and discipline
– the Sabbath and the use of computers.

5. The danger of encroaching on the role of the ministry.
The absence of accountability and the threat to church unity.’

I close with my favourite quote on blogging:

“The whole blog phenomenon is inherently ridiculous; the more serious it tries to be, the more absurd and pompous it becomes” (Carl Trueman, ‘The Theatre of the Absurd’ in Minority Report, p. 171) (if you have a blog – read that chapter!) Turning Points 2 – Crawford Gribben – Was there an Irish Reformation? (8.2 MB) The speaker at New Horizon 2007 will be Steve Estes. After Alistair Begg and John Piper, it would have been hard to maintain that quality of speaker, but Estes could be good. He has degrees from Westminster Theological Seminary (Carl Trueman) and has co-authored a number of books with Joni Eareckson Tada. Indeed, rumour has it that Estes was being targeted as a speaker for either the now defunct CTI (before a lack of “yankee twangs and dollars” (PL) brought an abrupt end to the best weekend ever) or a Mission week. You can listen to sermons from him on his church website. Having eight children, most people will be relieved if he turns out to be a Protestant, never mind worrying about how Reformed he is.

The Bible Readings will be done by Ray Ortlund, Jr. of Christ Presbyterian Church, Nashville. Previously, he was on the staff of Trinity Evangelical Divinity School (Don Carson) and, unlike last year’s Bible Reader, probably doesn’t go round claiming to be mates with ML-J.