Carl Trueman, the author of the latest in Crossway’s Theologians on the Christian Life series has, as he notes in the conclusion, spent his entire professional life reading and teaching Luther. Yet he has done so from a Reformed, rather than a Lutheran position, and in this book clearly relishes the challenge he has set himself to write with fairness and enthusiasm about someone with whom he disagrees.
Unlike Dane Ortlund’s very different book in the series on Edwards, Trueman sets Luther firmly in his historical context – showing what he took from it, as well as what he reacted against. One of the strengths of the book is that Trueman resists the pressure to try and turn Luther into a 21st century evangelical, and is at pains to show that on certain doctrines, especially the Lord’s Supper, Luther would struggle to recognise modern evangelicals as even Christian.
For preachers, the treatment in chapter 3 on Luther’s theology of the Word preached is a breath of fresh air. Trueman notes Luther’s ‘lasting hatred of anyone who talked about the Spirit rather than the Word’. For Luther, ‘the absence of God’s Word is the absence of God’ – and it’s no coincidence that in the Garden of Eden Satan attacked God’s word, because to do so is to strike at the character and power of God. Luther’s emphasis on the power of the preached Word wasn’t just because he lived in a largely illiterate culture, but because the Word mediated via another from outside ‘confronts me in a way that my own Bible reading can never do’.
The treatment of Luther on law and gospel is also very helpful. One interesting titbit hidden away in a footnote on Luther’s interpretation of the Bible is that although Luther is known as taking a more Christ-centred approach to the psalms than Calvin (and most moderns), he actually claimed to be breaking with all previous commentators by not seeing the psalms as first and foremost prayers offered by Christ.
Although the book would stand up as a rigorously academic treatment, its not just for theologians but for the ordinary person (Luther, by the way, saw the sacred secular divide as ‘pure invention’ – yet at the same time his teaching on the priesthood of believers didn’t mean ministers were now unnecessary). There is much that’s helpful when it comes to suffering. In one memorable illustration, Luther describes Christians complaining about minor suffering as ‘like a king who becomes frantic because he loses one pfennig [one-hundredth of a German mark]. Though he owns half the world, with countless money and possessions, he plays the martyr, throws a tantrum, curses, denounces God, and fulminates against Him’. In fact, the purpose of suffering is to drive anger, impatience and unrest out of someone until he reaches ‘such a pitch of peace…that he is no longer upset whether things go well or ill with him, whether he lives or dies, whether he is honoured or dishonoured’.
There is much here for doubting believers as well. The devil’s favourite tactic, according to Luther, is to make them doubt God’s favour. In complete contrast to the common idea that the Lord’s Supper is only for those who have it all together, for Luther communion is of little or no benefit to those who come without anxiety, timid hearts or terrified consciences.
One particular highlight is the section on the family, where Trueman shows how Luther’s theology affected his relationships with his wife and children. The evidence surely justifies Trueman’s conclusion that from such a study Luther emerges ‘as no less a great figure than his public ministry showed him to be, but as far more human’.
It is perhaps above all the humanity of Luther that comes across in this book. His was no ivory tower theology that didn’t touch down on real life – whether his own or his barber for whom he wrote a treatise on prayer. Nor was Luther a theologian who took himself too seriously. In a modern setting where people are all too quick to be ‘hurt’ or offended, ‘Luther’s robust mockery of pretension and pomposity is a remarkable theological contribution in and of itself’. Even if he sometimes had to be reproved by his wife.
Throughout the book Trueman criticises modern evangelicals for quoting the early Luther but ignoring the changes his theology underwent during his last 25 years. However although he seems in one place to have his sights firmly set on a Tullian Tchividjian’s book by the same name, his statement that ‘Jesus plus nothing was proving to be problematic’ is perhaps not the most helpful.
Those who have read or listened to Trueman on Luther before will find here much that is familiar, but this is still a great study on a magisterial figure who has much to teach us today.

Carl Trueman spoke in Stranmillis EPC a few weeks ago on the subject ‘The reformation – this stupid and pernicious tragedy?’, a title which was ‘borrowed’ from a recent lecture in Belfast by Professor Diarmaid MacCulloch.

In light of his comments during the lecture on Luther coming to the belief that God is primarily present through the proclamation of his Word, he was asked for his views on talk of scrapping – or not starting with – two services, for reasons such as freeing the minister up for evangelism.

Trueman gave another lecture the following morning and then preached on the Lord’s Day morning:

The audio of the 8 lectures he gave in Dublin on the following two days is also available here. 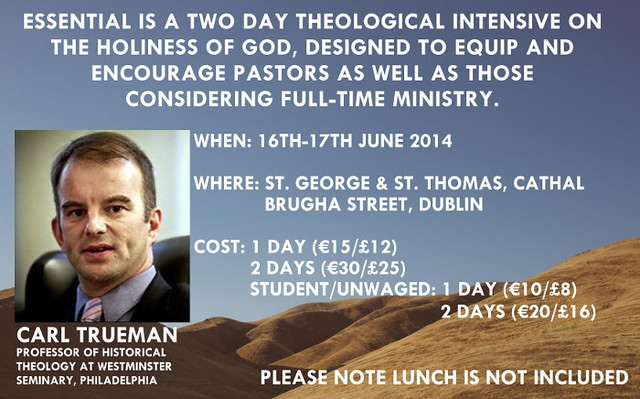 Carl Trueman is back in Northern Ireland this weekend, speaking at a few events organised by the EPC. The details are as follows:

Format: A lecture
Subject: ‘The Reformation – this stupid and pernicious
tragedy?’

Next week he’s in Dublin, for Irish Church Missions’ Essentials 2014 – details at the top of the post.

Then finally, in April he was hanging out with the Scots Irish (Keddie & Whitla) in Southside RPCNA as part of Reformation Indy.