Reformed Preaching: Proclaiming God’s Word from the Heart of the Preacher to the Heart of His People
Joel R. Beeke
Crossway, 2018 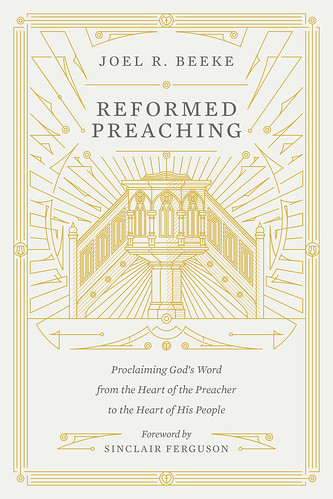 Joel Beeke has called this the most important book he’s ever written. It’s also not quite the book you might expect – in terms of page count it’s more church history / historical theology (254 pages) than homiletical instruction (165 pages). As a lover of historical theology I enjoy that aspect of it, but others might not. While the majority of the historical content deals with how those of the past (Reformers, Puritans, Dutch Reformed and a few more recent) preached and wrote about preaching, some of it leaves you scratching your head as to its relevance to the book’s topic – eg much of the chapter on Calvin, or the section where he summarises Richard Rogers’s book on the Christian life and private means of grace. This is perhaps due to the fact that various sections of the book have previously appeared in other books and articles – it’s not all written from scratch with an emphasis on preaching.

Beeke says that he would have preferred to call the book Reformed ‘Experiential’ Preaching. And though the word experiential was dropped for the sake of simplicity, he does spend a fair amount of time defending not just the concepts behind ‘experiential’ and ‘experimental’, but the words themselves. In a similar vein, while unsurprising, it’s a pity to see a modern book from the publishers of the ESV using the archaic KJV. Some parts of the book also seem overly prescriptive. For example ‘The Christian life…continues and deepens with…reading published sermons’. At times you wonder if the emphasis on piety drifts into pietism. (In fact, Beeke speaks positively of ‘pietistic and mystical tendencies’, even though one of the endorsements says the book tries to separate experiential preaching from pietism and mysticism).

Overall though, this is a great resource. At the risk of being simplistic, American Reformed Christianity particularly needs reminded that ‘too often preaching aims at educating big brains while neglecting withered hearts’ while British Reformed Christianity particularly needs reminded that our forefathers ‘had a profound sense that God builds his church primarily by the instrument of preaching’.