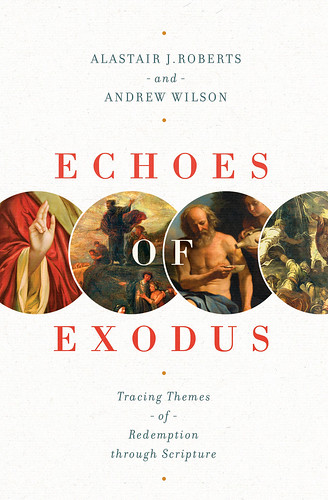 Carl Trueman once wrote a critique of biblical theology where he said that we’re in danger of fulfilling the old joke about the Christian fundamentalist who, when asked what was grey, furry, and lived in a tree, responded that ‘It sure sounds like a squirrel, but I know the answer to every question is Jesus’. For Roberts and Wilson, the answer to every question is the Exodus. They see its pattern everywhere in Scripture. Sometimes this leads to new insights you haven’t thought of before – and other times it leaves you saying: ‘really’? For example, they comment on Gen 26:16 that ‘The Philistines have blocked all of Abraham’s wells, which might remind us of the blocked wombs they experienced when Abimelech took Sarah into his harem’. Even if it was the same word in Hebrew (it’s not), that seems a bit of a stretch.

Even when the connections they trace seem more legitimate, I was at times left wondering whether the instance they cite really was an echo of the Exodus, or whether the similarities were just due to the fact that both God (eg he tends to raise up the needy) and human nature don’t change. And even if the patterns are legitimate, it doesn’t seem like many of them would preach. Surely we would rather be saying ‘Doesn’t this remind you of Jesus’, than ‘Doesn’t this remind you of Moses’.

Of course, you don’t have to go along with every single one of their connections to enjoy the book. The book will give you a renewed appreciation of the connections between the Old Testament and the New Testament, which simply aren’t there in what is claimed as further revelation today (eg the Book of Mormon). It will also help show that when the psalm writers look back to the Exodus, they aren’t just looking back to one historical event, which needs updated now Jesus has come – they are singing of the ongoing pattern of God’s saving power. Overall though, while they are some nice insights, this isn’t a must-read.