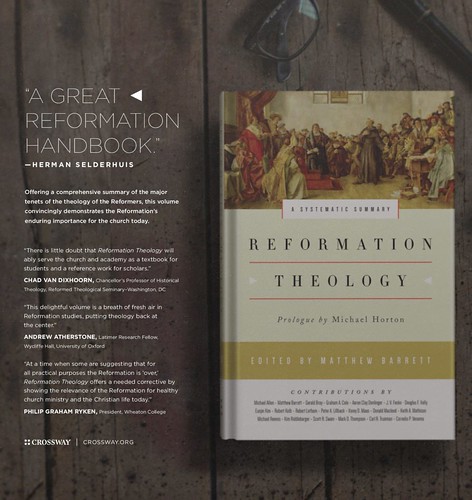 ‘At the start of any book, it is always helpful to know…the drive behind the book’. Few would disagree with that statement. Some will be unconvinced by the next sentence however: ‘Reformation Theology is written by a group of theologians and historians who are committed to Reformation theology’. By the time someone reads that, they’ll have noticed that the prologue was written on ‘Pentecost Sunday’ (wrong on two levels!) and the book is edited by a Baptist. Those facts of course don’t invalidate the authors’ arguments, but they do flag up that this is yet another Crossway book that presents the theology of the past through the glasses of 21st century evangelicalism. This is particularly apparent, for example, in the chapter on ‘The Relationship of Church and State’. The author spends pages going into great depth on the Reformers’ attitude to resistance to tyranny but largely ignores the elephant in the room, which is that ‘the most widely-held view among conservative Christians in Britain and America…is fatally flawed’ and very far from the position held by the magisterial Reformers.

An example of the editor either misunderstanding or misrepresenting Luther occurs on p. 56. Barrett quotes Luther’s statement ‘Reading is not as profitable as hearing it, for the live voice teaches, exhorts, defends, and resists the spirit of error’ then adds ‘Luther concluded this thought with a startling statement: “Satan does not care a hoot for the written Word of God, but he flees at the speaking of the Word.” Barrett immediately concludes: ‘Satan does not worry about Bibles sitting around on shelves. He begins to worry when those Bibles are picked up and taken into pulpits’. It’s pretty clear from what he quotes that the distinction Luther is making is not between Bibles sitting on shelves and Bibles being opened and preached, but between reading the Bible and hearing it preached. Going back and reading Luther in context makes it crystal clear that that’s the case.

As would be expected from Crossway, the Reformation’s theology on worship is largely ignored. The regulative principle is mentioned twice (once in a footnote), and Barrett comments: ‘Calvin would have been horrified by the church’s obsession today with “putting on a show,” driven first and foremost by pragmatic, consumeristic motivations’ and ‘Calvin’s [services] were characterized by a noticeable simplicity — no symbols, ceremonies, and rituals’. Both of those are true statements, but also ones which most readers will agree with, perhaps not realising just how contrary the worship of most Reformed churches today is to Reformation principles and practice. The fact that the Reformers pulled out the organs is hidden away in a footnote, church government barely features, and ‘Sabbatarianism’ gets one mention, thanks to Carl Trueman.

The Anabaptists are generally mentioned favourably throughout, and the negative comments in the chapter on Baptism are saved for Calvin. Indeed, there seems to be some difference between the authors as to whether the radical Reformers were ‘radical biblicists’ who rejected traditional Christian categories (Reeves) or whether they were radical because they ‘abandonded the history and traditions of Christianity and went back to the Scriptures for a fresh beginning of Christianity’ (Lillback). There is also a disagreement as to whether ‘from a Protestant persepctive of history it is more appropriate to label Trent a Counter-Reformation’ (Barrett) or whether it should be labelled ‘the Catholic Reformation’ and even have its own section (Trueman and Kim).

This is not a bad book. There is much to be gleaned from it. However it is shaped to a large extent by the concerns of 21st century ‘Calvinistic’ evangelicalism. If you had assembled a group of theologians in the 19th century who were ‘committed to Reformation theology’ and given them this remit, they would have come up with a very different book with very different emphases.

Overall this is a book written by and for those who like to think of themselves as committed to Reformation theology – there are many places where this book could have challenged that assumption, but most of its punches are pulled.