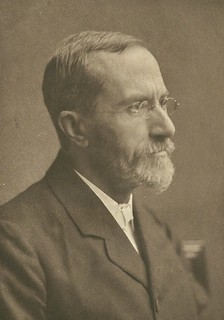 This is the second of a two-part series of posts on what some of Scotland’s better known theologians of the past 150 years ago have said about J. P. Struthers, minister of Greenock RPCS.

“…the late J. P. Struthers of Greenock (the only man of genius, Denney confessed to a friend after his death, he was ever intimately acquainted with)”
J. A. Robertson, “Memories of a Student,” in Letters of James Denney to W. Robertson Nicoll 1893–1917 (London; Hodder and Stoughton, 1920), xxxvii.

Struthers has practically prohibited me from saying anything about him, and has indicated his reluctance (which I hope he will overcome) to have the Watch [1] issued in London. He spoke in the kindest possible way about your letter to him, but regards being written about with the sensations of a whelk being wormed out of its shell on a pin point. But there can be no harm in telling what everybody knows—that he is a minister of the Reformed Presbyterian Church of Scotland, not an Original Seceder; that he preaches for anybody who asks him, and gets only too much of it to do; that he is a good preacher, the most solemn and the most tender you could imagine, as any one could infer from the Watch; and that his age may be guessed (it is only so that I have any idea of it) from the time when he was ordained—which according to the Clerical Almanac was 1878. His congregation is not large, but his church is full.
[1] The Morning Watch, edited by the Rev. J. P. Struthers, of Greenock.”
Letters of James Denney to W. Robertson Nicoll 1893–1917, p. 21.

On his preaching (in a letter to Struthers’ widow): “I am sorry you think nothing could be saved of his sermons. It was here he was original, deep, and tender and searching, like the Bible itself…”
A. L. Struthers (ed.), Pilgrim Cheer: a book of devotional readings, being extracts from the manuscripts of sermons by the late Rev. J. P. Struthers, M. A. (London, 1924), p. 5

“One of Denney’s most revealing comments on the Scripture came when he was advising his students about reading the Bible in public worship, referring them to the example of his friend, J. P. Struthers: ‘He never reads Scripture as if he had written it: he always reads it as if listening for a Voice.’ ”
John Randolph Taylor, God Loves Like That! The Theology of James Denney (Richmond, VA: John Knox Press, 1962), p. 140.

“To be about to be married is a very fine state to live in if you had nothing to do but think about it; but as things are with me, it is really not without a serious side. It takes up a little time, and sometimes more than a little, and it is also a little distracting. You don’t want to think seriously about preaching, and as a matter of fact can’t—at least I can’t without a disproportionate effort, for all that comes of it. If you want to remain the only man in Greenock that can fill a kirk on the Sabbath evening, abide as you are.” [from a whole chapter of letters written by Denney to Struthers]
James Denney, Letters of Principal James Denney to His Family and Friends, ed. by James Moffatt (London; Hodder and Stoughton, 1922), p. 10.

A few short quotes from the chapter in Letters to his friends and family:

On holidays:
‘Instead of preaching at the expense of your health…’ (p. 35)
‘the only thing on which I don’t consider you an authority is holidays. Your mind wants liberalising there.’ (p. 76)

On their friendship:
‘There is not any hand in the world I like better to see on an envelope than yours. As Mrs. Denney is at home when I write this, nobody has any right to be jealous.’ (p. 41)
‘A letter from you is one of the happy events of my life’ (p. 44)
‘You are the only man who ever takes the trouble to send a line here out of naked friendliness, neither wanting me to preach nor wanting anything else, and I assure you I value it highly.’ (p. 50)
‘And when you come and let on that you can be indebted to me, I feel as if you were ‘as one that mocked’; it should be the other way about.’ (p. 54)
‘I would rather graduate with you than with any man alive.’ (p. 59)

On Sabbath keeping: ‘Sorry I have not even a sentence about Virgil. Have not read him, I think, since you reproached me for reading the sixth Æneid on a Sabbath evening.’ (p. 46)

On the Morning Watch: ‘I am sorry you are getting so little help for the Watch, but really I think it is probably the best thing for the Watch, though it is heavy on you.’ (p. 57)
‘The Watch followed us here, and was received with joy. I have not anything in the house that I am more proud of than my unbroken set, and my dear wife had, if possible, even greater pleasure in it than I. Just now I am reading Carroll’s last book on Dante, and though I have a kind of envy—admiring, not malignant, I hope—for a man who has actually finished a big thing like this, it is nothing to the feeling with which I contemplate the endless originality of the Watch.’ (p. 85)

On humour: ‘Why in the world do you write to me about the humour of the Bible? I mean to hear your lecture on the subject, but I don’t feel able to offer hints.’ (p. 78)

“GLASGOW, January 18, 1915.
DEAR MRS. STRUTHERS,—I cannot say what I think or feel with your loss before my mind. Your husband was not only the greatest but the best man I ever knew, and there must be thousands of people everywhere for whom his place can never be filled by anybody in the world. It was impossible to know him at all without feeling all the love and reverence for him of which one was capable, and it is only this which gives me courage to say how truly I sympathise with you. He wrote me a characteristically friendly letter at the New Year when he sent me the last volume of the Watch, and it had one or two serious touches about taking care of strength and not overdoing things, which I now see must have come out of his own sense of being overdone. Surely if anybody was ever faithful to the last atom of his strength, it was he.”
Letters of Principal James Denney to His Family and Friends, p. 92.

“Struthers belonged to the Reformed Presbyterian Church, although born and brought up in the Original Secession body, and his genius and consecrated life made a profound impression upon Denney. “I have never known a man who had so deep a sense of the love of God, or who so unmistakably had the love of God abiding in him” was the latter’s testimony concerning his friend…Denney loved the Watch, as he loved its editor, and helped it too. He once described the Magazine in these words: “It is just like reading a letter”; and once, when giving a list of the Hundred Best Books, he included The Morning Watch as one of the Hundred… The playfulness and humour which made Struthers’s talk so fascinating, and lightened his preaching and lecturing, were like sunbeams playing on the face of the deep. Perhaps the most gifted preacher of his time in the West of Scotland and a veritable man of genius, Struthers was yet very reserved, very shy, very humble, very lovable. A creator of pure fun of the whimsical order, he had also the touch of sadness that so often accompanies a playful wit. He was at once humourist and melancholian. He was notable as the man who, with characteristic modesty, declined the honour of D.D. from Glasgow University. He and Denney were to be “capped” together, but the latter confessed afterwards to a feeling of relief, as he felt himself so unworthy to stand on a parity with an already so great and real “Doctor of the Church” as Struthers.
The Reformed Presbyterians were proud of Struthers, as they had cause to be. He was their foremost preacher and expounder of the Word.”
T. H. Walker, Principal James Denney, D.D.: A Memoir and a Tribute (London; Marshall Brothers, 1918), pp 15-16.