Brothers, we are not professionals: a plea to pastors for radical ministry (updated and expanded edition)
John Piper
B&H Publishing Group, 2013 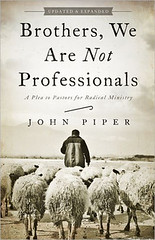 Despite not having read it before, I’ve held this book on a pedestal for quite a while. This was thanks mostly to excerpts I’d heard from it, especially an impassioned reading from ‘Brothers, Bitzer was a Banker’ which was one of the highlights of Hebrew class. As a result, it has been on my to-read list for a while, but I wanted to wait until the updated edition came out (with 6 extra chapters) before I finally got round to reading it.
Those looking for a coherent whole will be disappointed. The book is a hodge-podge of chapters relating (to a greater or lesser extent) to pastoral ministry. A number of the early chapters are summaries of Piper’s other books, here focused on the pastor’s work. At least one chapter is originally a website article and chapters are given to issues such as racism and abortion.

Within that mix there’s much to benefit from (I marked 15 out of the 36 chapters as particularly helpful). The chapter I’ve heard cited most is probably ‘Brothers, fight for your life’ (ML-J’s take on reading), and it’s definitely a highlight. Piper quotes Stott that an hour a day ‘is an absolute minimum for time for study which even the busiest pastors should be able to manage’ – and suggests three twenty minute segments. Elsewhere he searchingly asks why we don’t weep over the lost and says: ‘without those tears we may shuffle members from church to church, but few people will pass from darkness to light’. While unbroken seriousness is a sign of a sick soul, we must be in earnest.

In terms of preaching, chapters 13 and 19 (‘Brothers, save the saints’ [not the lost]) are very helpful on the necessity of preaching for the spiritual survival of those who are already Christians. ‘There is not an earnest sermon for evangelism…and a less critical message for the saints to simply add a few starts in their crown’. Yet that doesn’t mean we shouldn’t preach doctrinally – in fact: ‘A steady diet of gospel messages that do not help the saints grow out of infancy not only stunts their character but also jeopardizes their final salvation’.

One of Piper’s most convicting calls, for pastor and people alike, is ‘Brothers, tell them copper will do’. Elsewhere Piper warns that we’re living in a day which has seen the hijacking of the word arrogance to refer to conviction and the word humility to refer to uncertainty – a day when we’re even further down the road which Chesterton prophesied would produce a man ‘too mentally modest to believe in the multiplication table’.

My overwhelming sense while reading the book however was that it could have done with being reduced rather than expanded. 36 disparate chapters makes it a bit of a desperate read, and some could easily have been cut. These include a mild-mannered attack on infant baptism and a chapter with a potentially helpful title (‘Brothers, focus on the essence of worship, not the form’) which ends up trying to quote Calvin and the Puritans to say that the form of worship doesn’t matter. A number of typos also make their way into the text (‘entrancwe’, ‘S’o’, ‘the affections of our people have for God himself’). At least one footnote hasn’t been updated to point to the correct chapter number in the new edition, and it’s strange in 2013 to find another referring to ‘cassettes’ which have long since been digitised.

There’s much that’s helpful and challenging here, but 36 chapters is a tough slog in one go, over a month if you try and read one a day, and too many to try and study in a fraternal. Piper notes that Thomas Jefferson trimmed the gospels with scissors; the reader may have to do the same with this.

Thanks to B&H for providing a review copy.